Ax tattoos represent not only a tool, but the strength and power of the people who carry them. And now I'm going to expand your knowledge a little about the tattoo designs that surround this powerful weapon.

If you are ready to search tool tattoos, you will realize that, ax tattoos as well as crossed ax tattoos they are one of the most popular. And is that given the choice, there are many people who choose to translate this tool on their skin. Some do it because they have a certain meaning with their humble origins or because of the work they do.

The arm can be a perfect place to get this tattoo, although everything will depend on how visible you want it to be. There are even those who have ventured to get an ax tattoo on their faces, impressive!

What do ax tattoos mean?

Ax tattoos have always been associated with characteristics de strength, leadership or nobility. It was not until the Europeans met the fierce warriors of the north, the Vikings, when they started to see axes tattooed on their own skin as well as other elements of their culture, which made them be feared by all his adversaries to the point of believing that they were got damn with human skin.

Over time, these tattoos have been gaining strength among the European population and spreading at high speed with an endless number of meanings. The more common are the ones we have named before: force, leadership or nobility. But others very valid meanings for this type of tattoos according to the designEg two crossed axes are a symbol of sisterhood between people or peoples.

Un meaning curious for this type of tattoos is the farming, once the sowing season was over, the ax was buried to transmit its force to earth and so have strong and abundant crops. In the antigua China the ax was embroidered on the robes of the officials closest to the emperor to represent his social status and his closeness to power.

Following up with more meanings Of the ax tattoos, another of the most widespread and used are two parallel axes and represent the two contradictory ideas for which this is used. tool; The idea of ​​building and destroying, two totally opposite actions that can be carried out with the same tool. 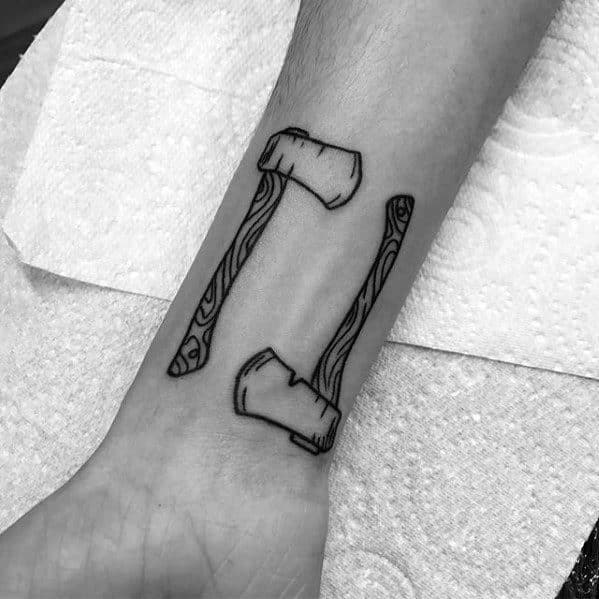 Sacrifice, surrender, determination sound others of the meanings more widespread for ax tattoos. A person who has this powerful tool tattooed is understood to be capable of anything in order to meet your goals or defend yours in any situation that requires it since does not know fear.

The ax tattoo designs join the belief of fertility and penetration since the ax, with its sharp edge, opens new ways. And in turn, the double-edged ax is linked to Hinduism because it symbolizes the celestial illumination; in some cultures even the ax is related to the ox which makes it a mighty talisman of strength gross and animal.

A design that is also very widespread is the tattooing of a miniature ax on the fingers of the hand, symbolizing how the needs that we may have in life are at hand.

On the contrary, other people who get an ax tattoo can do so because of the history behind this tool and by the characteristics that the person who uses them must have so that they can "function". And it is that axes are strong tools that have been able to help human development and evolution for thousands of years. And all this despite the fact that its operation is very simple.

Finally, it should be noted that the ax is a tool present in almost all the cultures of the world And, of course, each one of them has given it its personal touch, making us find designs, drawings or representations of the most original and varied.

From the feathered axes of the native americans until rude Nordic axes, this tool has helped all the people of the planet to evolve, grow and develop powerful civilizations of which today we are witnesses through history, paintings or legends that pass from grandparents to parents and from these to their children.

It is enough to grip firmly and generate force as well as speed so that the edge of your head can give the impact. Within the world of tattooing, there are many ax tattoo designs. And, as I said at the beginning of the article, there are all kinds of them, although we can differentiate them into two types, those with a simple ax, and those that include two crossed axes.

Although, if we delve into the ax tattoos meaning, we can include them in several categories. On the one hand, its cultural meaning, associated with the Vikings, on the other, that of hard work (lumberjacks or firemen, among others) as well as that of terror, associated with the world of cinema and different stories in which this tool has played a macabre role.

And, as always, in tattooing we want to give you a little inspiration for your next design and that is why we leave you a small gallery with some ax tattoos that we have found, we hope you serve, Os help and give you original ideas to draw on your skin.

Each filtering bag ax tattoos They are a very interesting option due to their interesting meaning that we explained before. If you are looking for ideas for tattoo you an ax, here you will find them. There are designs for all tastes and colors. More or less discreet, simple, elaborate, in color and / or black and white. There are also ax tattoos that seek to most faithfully represent a conventional ax, while others have a closer orientation to the ax as a weapon.