Name tattoos offspring are one of the exceptions of the tattoos with names. Just as it is not a very good idea to tattoo the name of your partner, for what may happen, the same cannot be said of the children, that for the good and for the bad they will always be there.

In this article we will look at a few ideas that we hope will inspire you for your next piece. Keep reading and you will see!

The name of your offspring on a dry stick

In this type of tattoos you have more options than what seems at first glance to get a design that is very original. Thus, even if it seems that the name can be a bit bland, you can play with elements such as typography to make it look different.

One of the most used fonts is Gothic, although keep in mind that this works for rather large designs. For the little ones, a more discreet typeface, or even one that imitates handwriting (a very original option is to use your child's handwriting) works much better. 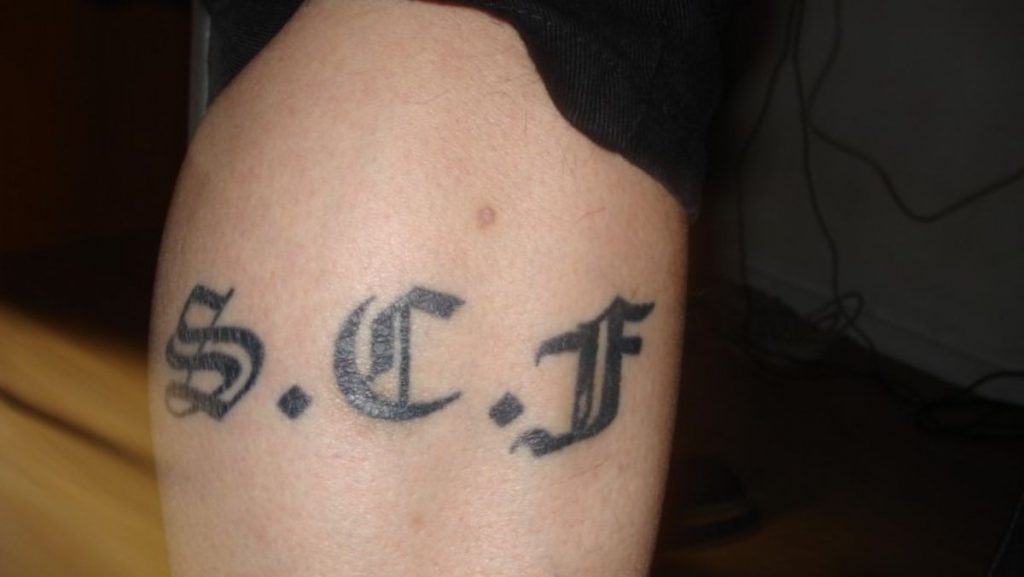 The name accompanied by borders

One of the keys to making your tattoo unique is choosing the correct font. By correct we do not mean that there are more beautiful fonts than others, but it is positive that you look at the type of tattoos you want to know which one to choose. For example, a border design can work with thin italic typeface, something that in smaller tattoos would be risky because, with the passage of time, the lines could join each other and lose their sharpness.

Although if you want a small design, another option that you can estimate is your child's initials. As it is only two or three letters, it works in a multitude of styles, for example, with thinner or thicker lines, in color, in black and white, with a traditional style ...

… And a simple letter 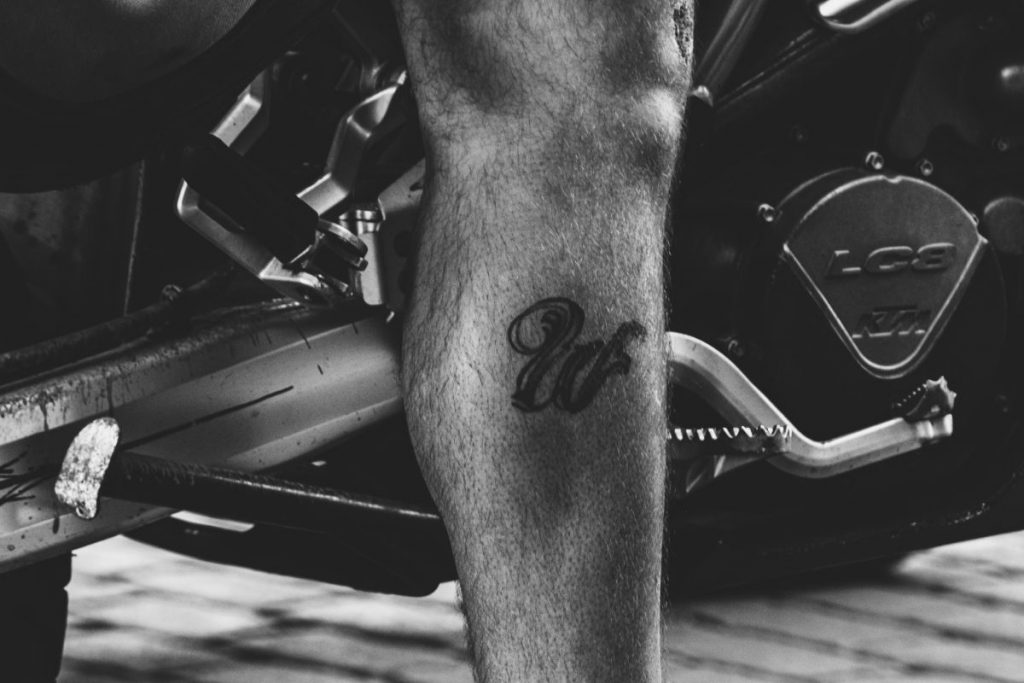 But if you really want a design so and so simple that almost no one knows what it refers to, choose only to put one letter of your child's name. It does not even have to be the initial, since you can choose, for example, the letter that is repeated the most in its name. Opt for a small design if you want a discreet piece, although larger tattoos, with the letter in a more gothic style or simply larger, are also very cool.

On the knuckles, for the toughest 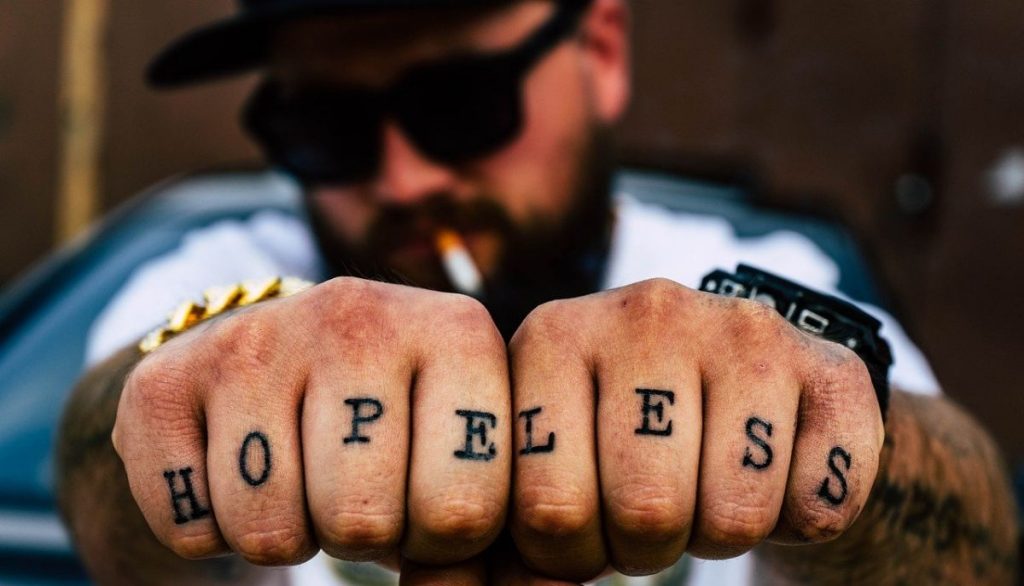 Another option, although only for the toughest and most daring, since tattoos on the knuckles still have certain negative connotations, is to tattoo your child's name on this part of the body. It is very cool with letters that imitate the traditional style, although another of its limitations is that your child's name cannot have more than eight letters (ten if we count the thumbs).

The name on the neck

One of the places where you can immortalize your child's name on your skin is on the neck. This place is perfect for a small tattoo (It is on the back, but the neck frames it naturally) and with a discreet typeface. It is also ideal for those who want a very, very discreet design, as it can be easily hidden by leaving your hair down.

Important dates next to your name 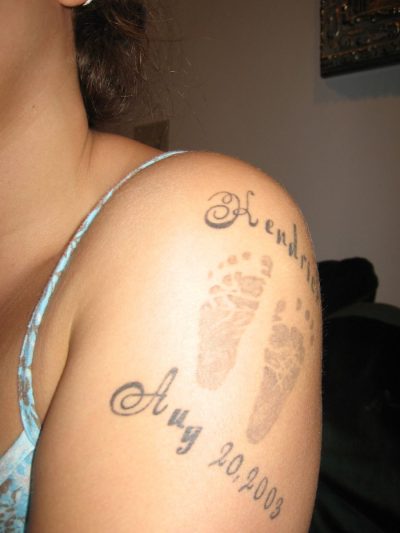 Another idea to give this design a twist is to include a date with it. Choose a day that was especially important (usually the day of his birth is used, but do not rule out other options such as the day he said his first word or, if he is older, the day he graduated) and embed it in the name , or put it aside.

The name in other languages

Finally, not only can you choose a design in which the main character is your child's name in our language, you can also choose to "convert" it into the characters of another. For example, Arabic, Hebrew, Japanese or Chinese are some of the most popular languages ​​for these types of tattoos.

Tattoos of names with drawings and other elements

In this second part of the ideas that we have today for tattoos of children's names can also be accompanied by other elements and drawings. It is your choice to decide who is going to carry the weight of the design, whether the name (in which case it is probably larger than the drawing) or the drawing (in which case it will be larger and more elaborate than the name). Some ideas include the imprint of the hands and feet, the character of a series that he likes a lot, his teddy bear, a bottle ... 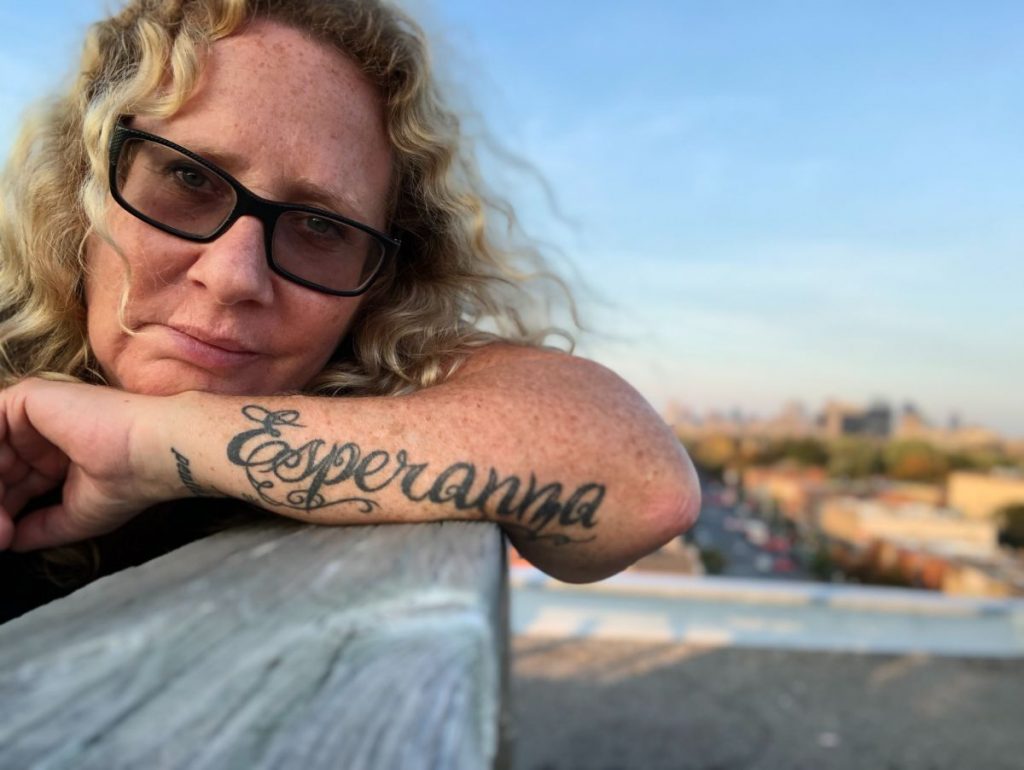 The name accompanied by flowers, a lot of possibilities 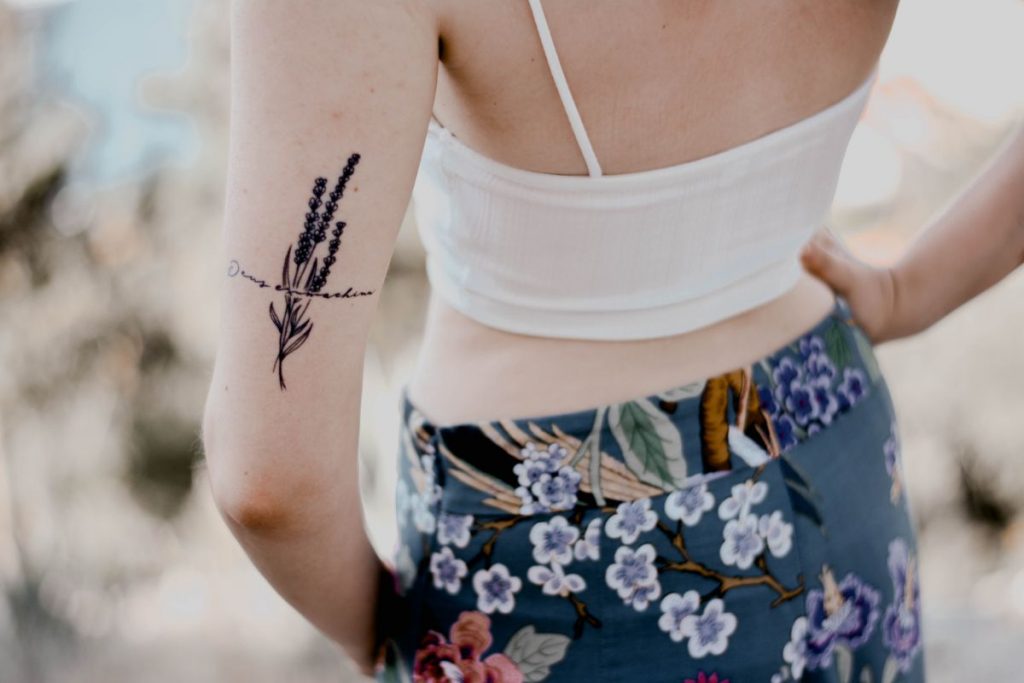 Flowers are one of the great reasons to accompany the tattoos of children's names. Among the most popular are roses, but if you want a design that is very yours, you can be inspired by those flowers that most remind you of your child. This is not only limited to the name, but it can refer to stories that only you and he know, for example, a flower that he especially liked, with which he starred in a photo ...

The name accompanied by stars, you will shine! 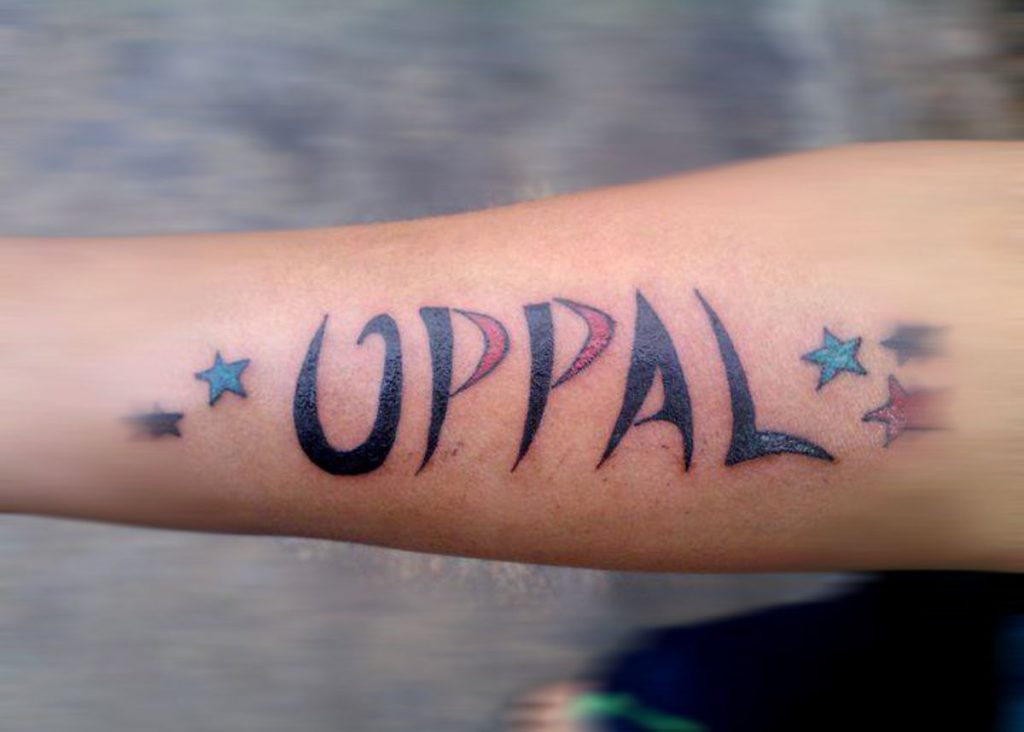 Other reasons that your child's name can be accompanied by are the stars. The good thing about this element is that it looks great both with more classic fonts and with others, more modern or less seen. What's more, they look great with a touch of color, either in the stars or in the letter itself. 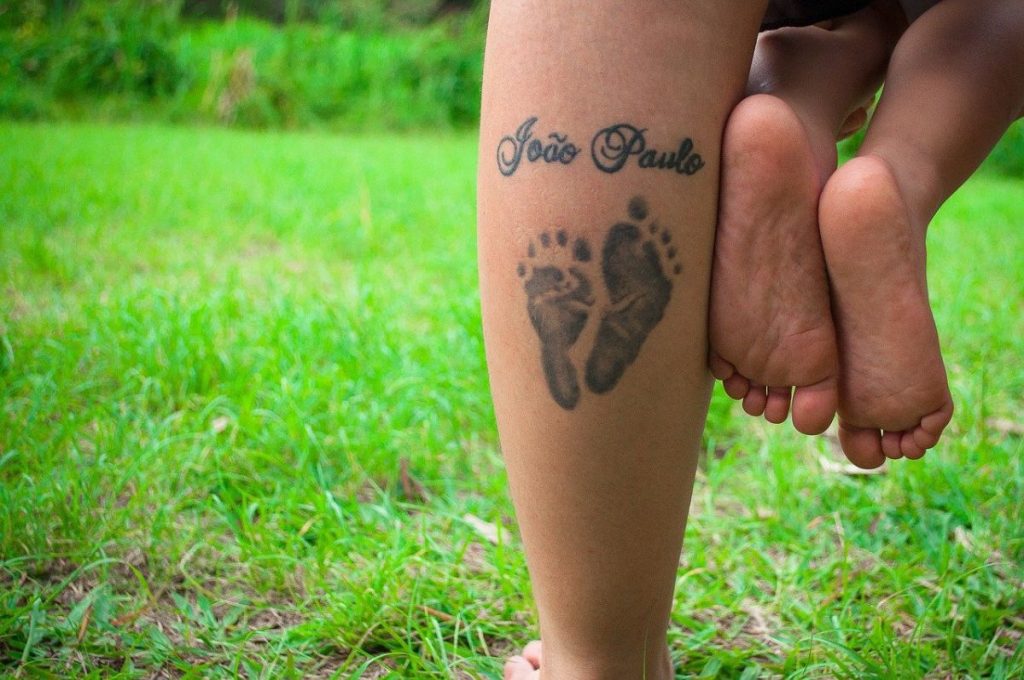 On the other hand, and for those who want something more beautiful and that may embarrass your child when he grows up (all the more reason to opt for them) is to put his fingerprint next to your child's name, either from the hand or the foot. It is a simple and at the same time very personal design that looks especially good on the leg, in the case of the feet, or on the heart or arms, if you opt for the handprint.

Wrapped in hearts and ribbons

Another idea that you can draw inspiration from for your next design is to surround your child's name with hearts and ribbons to show your love for him. Hearts, as you can imagine, are a very popular design, but the good thing is that they support a lot of different designs. For example, they can be red, but also many other colors, with the shape "of a lifetime" and also anatomical. Adapt them to your taste and that of your child to make it a totally personal design!

The name and infinity, another very popular design 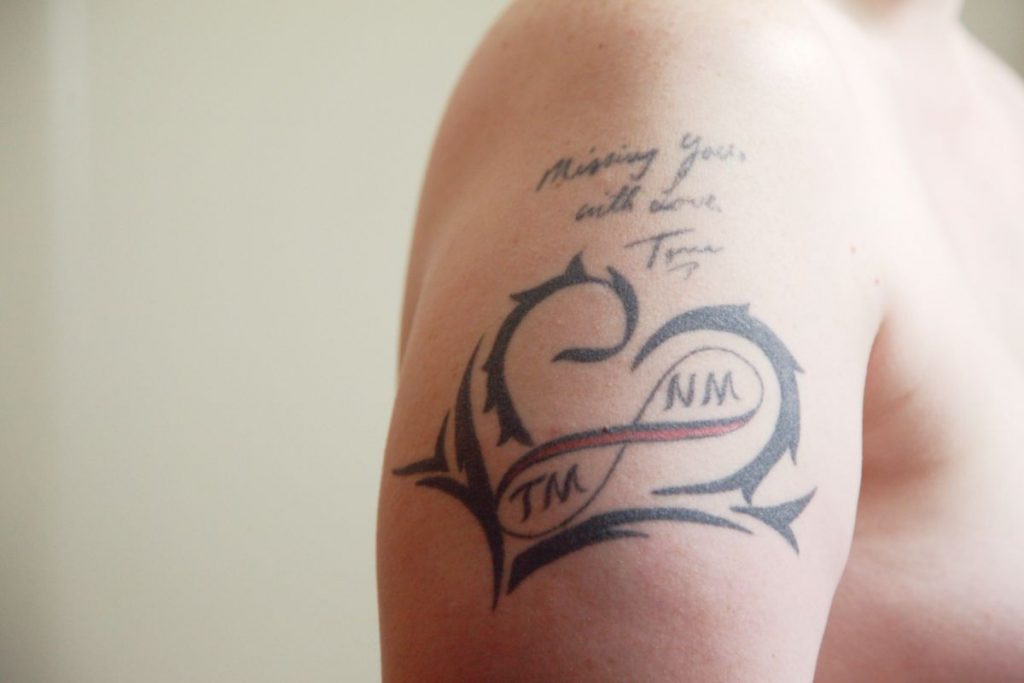 The infinity is another of the most popular reasons when it comes to getting a tattoo. Unlike the heart, it does not have so many designs with which you can get a tattoo that makes a difference. However, if you like it a lot, in the end what counts is your taste. You can make it fit with the full name of your child, but also with the initials, for example, and give it a touch of color. 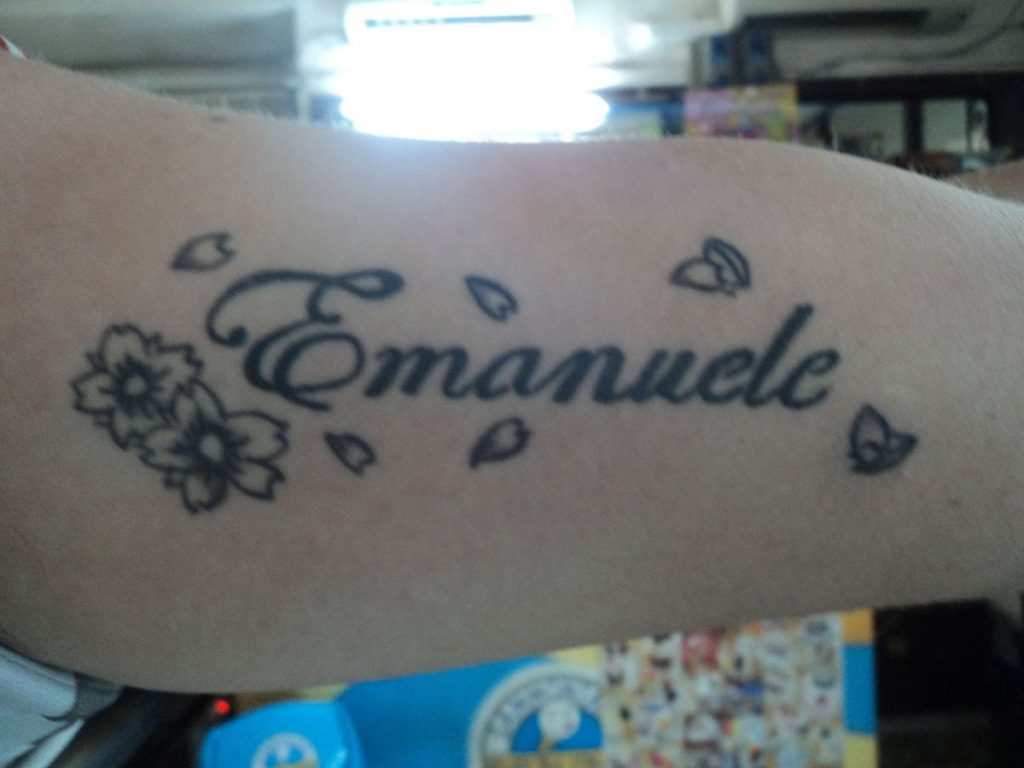 We hope we have given you good ideas for tattoos of names of children. Tell us, do you have any? What name is it? Tell us everything you want in the comments!

Full path to article: Tattooing » Types of tattoos » Tattoos with letters » Tattoos of children's names, with you forever