El wolf tattoo It is something that everyone likes for its beauty and its courage. For many people the wolf has great symbolism thanks to its history and meaning. In some cultures, wolves are predators of the night, expert hunters and just as some are impressive animals, others fear them. For other cultures wolves are warriors names, great leaders and protectors of innocent beings.

They have a very varied reputation and it seems that the wolf is a special animal that will always occupy a place in our hearts since it is one of the ancestors of people's best friends: the dog.. Wolves forever have been seen as fierce warriors without fear, as natural predators and is that people feared him for considering them beasts.

The wolf tattoo represents his nobility

The wolf has gone through many meanings depending on the time and culture, but the reality is that it always is and will always be an incredible animal worthy of admiration and of course to respect.

In many American and Mexican tribes, the wolf is seen as a totem of energy and strength, but also as a great pillar of wisdom and a spiritual guide. They are Native Americans, wolves are much more than a wild animal and it is considered that it is a totem for the future life because it helps to understand death and experience with its predatory nature.

Wolves when they mate with a female they stay with her forever. They are loving parents to their young and will always protect them no matter the circumstances. They are also known as loyal and talkative animals.

The image of the wolf howling at the moon is a symbol of his ability to express his control over the region or to call the members of the pack to meet. It is an excellent image for a tattoo and above all, loaded with symbolism and meaning for the person who decides to get that wolf tattoo.

The howl is not the only tool that the wolf has to communicate with its peers, it also uses body language to convey a wide variety of feelings such as: fear, aggressiveness, sympathy and even affection for the members of its pack. Because the wolves dear readerIt also has feelings since it is a living being with its own personality.

The wolf uses the sense of smell, hearing and sight to display a complex range of emotions in order to communicate. In these types of behaviors he can display social behaviors learned from his parents and other members of the pack.

It is clear that the meanings will vary depending on the person and the experiences they have had in their life, since each one can interpret the symbolism of the wolf in different ways. Maybe you like wolves because you were lucky enough to meet some and understand what they are like and the nobility that characterizes them if they are treated with respect and affection from birth. Or maybe you like it because it symbolizes something important to you and your family.

In addition, the wolf is also a symbol of luck and fertility, a very important meaning for many people. In the Mongolian tradition they believe that they are descendants of wolves and that is why they see it as a sacred animal. Many people consider the wolf to be a being that attracts good luck and prosperity.

In Chechen culture, the wolf is more than a wild animal, it is a symbol of national pride. They believe that the mother of the wolf is the maximum symbol of strength and protection that helps the people to feel protected.

The wolf in our language

Currently the wolf is a wild animal that we admire and that we really like and attracts good vibes, many people tattoo a wolf tattoo maybe simply because of its beauty and to transmit strength and power.

But without realizing it, the wolf is even in our current language since we have it influenced by its presence. Maybe you've ever said something like: 'I'm so hungry I'd eat a cow'. Obviously you would not eat a cow, but it is a way of raising awareness of how hungry you are. Other expressions that have to do with the influence of the wolf in our culture are:

Also exist tribal wolf tattoos that are linked to abstract themes and a more enigmatic world. On the other hand, if you decide to get a wolf skull tattooed, it's worth saying that it represents dark energy. If you tattoo a wolf that stares you will be showing your resistance and your courage in the face of life and if you tattoo it fierce and growling, then you will be showing all your courage, defense and feeling of protection.

This is the most important thing you should assess in the case you want make a wolf tattoo in your body, but remember that what really matters is what it means to you, regardless of what it may mean to other people or cultures.

As with most designs, wolf tattoos were not going to be left behind. They have a great common characteristic and that is that you can enjoy them in different ways without altering their meaning or their silhouette itself.

In tribal wolf tattoos, we will see how black ink will be the main protagonist. In addition, the silhouette of the animal will be formed thanks to those lines so characteristic of this phenomenon. A unique and very original way to give life to your tattoo. In addition, it carries with it the most traditional great ideas that have been preserved from the ancient tribes.

The most minimalist touch focuses on this style. The geometric wolf tattoos They will be made up of lines, as well as circles or triangles. But believe it or not, all of them in full harmony, achieve a fantastic, simple and very modern result. It is said that these types of symbols were highly valued until the Renaissance, although it seems that today, they still are.

The wolf tattoos on arm it is frequent that they decorate the upper part of it. Although if you want to add a little more originality, you can always tattoo the back of the arm, close to the elbow.

If you like color combinations, then you will love the watercolor wolf tattoos. The black ink is relegated to one side because the explosion of light will be the main protagonist. The best shades come together in an abstract type tattoo but without forgetting that the wolf is also the most relevant figure.

If you want to wear a wolf tattoo on back, then it will be a good place to go for the larger designs. You can always combine the animal's face with the moon or its howl, which is also in great demand in this type of design.

The howling wolves they are a great weakness. We have already mentioned them but without a doubt, they are also great protagonists. If the wolf is howling at the moon, it will symbolize femininity. But at the same time it is also power, protection or wisdom.

By now we have all seen the "Twilight" saga. Well, the character of Jacob black has the advantage of turning into a wolf. But in his human version, he has a tattoo on his arm. A tribal style design that can be differentiated as in it, highlights the head of a wolf. Surely you have already noticed! 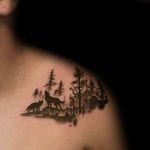 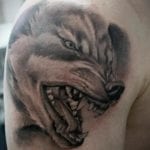 Although they are many and varied, there are always some that stand out a little more. So if you are looking for ideas and inspiration, here we leave them in the form of images. The best wolf tattoos are at your fingertips! What is your favorite?.

Related article:
Wolf and mandala tattoo, an appeal to your wild and sensory side